It has been pointed out to me that although I blog every two weeks on our Shorelink site (www.shorelinkwriters.co.uk) I have totally neglected my own web site for some time.  It was suggested that as I sometimes write short stories and occasionally even attempt a poem, perhaps it would be fun to post some of these on my own blog site. So here goes. I wrote Time Remembered last autumn. I hope you enjoy it.

Verity was conscious that her feet were aching, but she could live with that. The worse thing was that she was bored. Here, in Oxford Street, teeming with thousands of shoppers oohing and aahing at the glittering goods on display all around them, she was bored. Once upon a time she would have been as avid a shopper as Emily, her sixteen year old daughter, who had just dived into yet another boutique, which looked exactly the same as the one she had just exited, calling ‘won’t be a minute’ over her shoulder.

Perhaps she had become the epitome of freedom from want, except she didn’t want anything because she had so much. She edged into the shop after her daughter and perched on the uncomfortably frail cane chair just inside the door. She exchanged a sympathetic glance with the quite smart, but middle-aged and indefinably middle-class woman on the chair opposite. Then she realised with a shock that she was communing with her own mirror image. My God, she thought, remembering the mini-skirted girl in the long white boots who used to scour London’s streets for bargains in her lunch hour. Where did my life go? That dreary cow is absolutely not me, is it? But it was.

“Mum, what do you think?” Emily twirled before her in a silver and blue ball gown. She looked amazing. And young.

Verity smiled. “The best yet. You’ll be queen of the prom in that, I think. Is that the one? ” She tried to stop it sounding like a plea, and obviously succeeded too well. Her heart lifted but then sank again at Emily’s reply.

“I think so. But just a couple more shops to be sure. You OK?”

“Bit worn out, love. What with your dad being away and Ben being home ill, it was a hefty morning.”

“Trust my stupid brother to get flu just when we wanted a proper girl’s day out. And you had to walk Sammy as well, didn’t you? I know, Mum, you go and get a coffee in Harrods and I’ll come over when I’m done.”

Verity gratefully accepted the offer, checked her daughter had her phone (as if she would be seen dead without it!) and her bank cards, and made her way across to Harrods. Subsiding gratefully into a comfortable leather chair, she ordered a pastry to supplement her coffee, and reflected that her kids were probably more thoughtful than most teenagers. The pastry was typical of Harrods when it arrived, huge and indulgent.

Verity was just wielding her fork to attack it when a voice behind her said, “I thought it was you, but as soon as I saw that cake, I was certain.”

She froze, fork suspended. Then very carefully she put it down on the table, afraid that if she put it on the plate it would rattle, and become obvious that her hands were suddenly shaking. She turned slowly to face the voice.

She thought, ‘I am blushing’, how strange. I didn’t know I still could.’

“Can I sit with you?” His voice was deeper. Older. But still beautiful.

“Of course.” It came out a bit high, a bit breathy, but nearly normal.

He sat opposite her, placing his drink (still red wine, she noticed) on the small glass table between them. “I saw you. I followed you here.” He placed his hand on his heart, bowed his head and said. “I cannot tell a lie.” Then he grinned at her and twenty years rolled away.  “Was that Emily?”

“Home from Uni with man-flu. But good, when not suffering. And your two boys?”

“Both at Uni. Charlie is doing a PHD now. I think he is going to be an eternal academic. But in a good relationship. Henry is sports mad and brings home a different girl every weekend.”

She nodded and they fell silent. His hand crept across the table until his fingers touched hers. She knew she should withdraw them, but it was as if their hands were magnetised.

“And Lucy?” She was proud of how un-wavering her voice was.  “How is she doing now the boys have left home?”

“She’s started her own business, making and selling jewellery. It’s going quite well.”

“Oh,” she said. “That’s good.” A voice in her head was going no, it is NOT good, I wish her fucking business was a disaster, but she resolutely silenced it.

A brief pause, then he asked, “And Luke?”

She hesitated. “Busy. You know, family and stuff. And I’ve started to do come teaching again. Just evening classes to get my hand in, really.”

His fingers grazed hers and her spine tingled. The air between them was noisy with questions.  Were they worth it, these families of ours?  Would it have mattered if we had not been so bloody loyal? Are you happy? Do you still…?

He broke the silence, his pressure on her fingers intensifying. “Do you still…”

“Hey, Mum! I managed to find the most fantastic, absolutely incredible…” Emily stopped beside them. Her carrier bag high in the air, her eyes puzzled as she glimpsed their quickly withdrawn outstretched hands.

“Oh, darling, how lovely. Come and join us. I was just explaining to this gentleman that I ordered this huge pastry and then promptly lost my appetite, but I was sure that you would be able to cope with it when you got here.”

“Too right I will. It looks yummy.”

He stood. “And I must move on. Please have my chair.” He turned to Verity. “So sorry about the pasty. Life is full of regrets, isn’t it?”

She gave a polite laugh and watched as he disappeared back into the crowed street.

“He was dishy, Mum,” Emily splattered the words through a mouthful of cream and giggled. “Do you know, just for a minute, when I came in, I thought poor old Dad, Mum’s sitting there holding hands with the love of her life. How daft is that?”

And they laughed together. 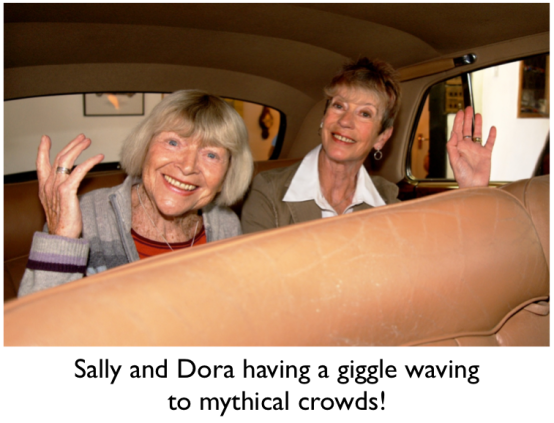